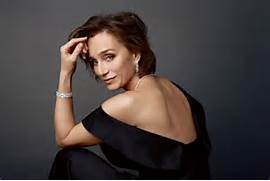 Scott Thomas was brought up as a Roman Catholic. Her childhood home was in Trent, Dorset, England. Her mother remarried, to another Royal Navy pilot, Lt Cdr Simon Idiens (of Simon's Sircus aerobatic team flying Sea Vixens) who also died in a flying accident, flying a Phantom FG1 off the North Cornwall coast, six years after the death of her father. Scott Thomas was educated at Cheltenham Ladies' College and St Antony's Leweston in Sherborne, Dorset, both independent schools. On leaving school in 1978, she moved to Hampstead, London, and worked in a department store. She began training to become a drama teacher at the Central School of Speech and Drama, enrolling on a BEd in Speech and Drama. During her time at the school, she requested to switch degree courses to acting but was refused. After a year at Central, speaking French fluently, she decided to move to Paris to work as an au pair and studied acting at the École nationale supérieure des arts et techniques du théâtre (ENSATT). When she was 25, she was cast as Mary Sharon in the film Under the Cherry Moon (1986).